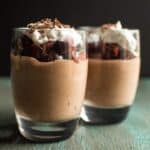 Five ingredients is all it takes to make this luscious black forest mousse. It’s like a deconstructed version of the classic cake! Serves 6.

1. Loosely adapted from Minimalist Baker’s 3-Ingredient Dark Chocolate Peppermint Mousse.[br][br]2. This recipe probably won’t work with low-fat coconut milk because it isn’t thick enough.[br][br]3. If you don’t have a bar of baking chocolate around, just use a cup of chocolate chips!