Home › How To Guides

How To Make Pomegranate Molasses

Have you ever tried pomegranate molasses? It’s tangy and bright in flavor, and it’s easy to make at home! You can use it for dressings, sauces, or roasts. You can even drizzle it on desserts!

Pomegranate molasses is not the easiest ingredient to find in grocery stores, which is why I prefer making it myself with pomegranate juice that I can just get at grocery stores.

HOW TO MAKE POMEGRANATE MOLASSES

Tear the pomegranate apart into different sections. Remove the arils by prying them loose from the rind. To prevent pomegranate juice from splattering everywhere (because it will), loosen the arils inside a large bowl filled with water.

When you’re done, you’ll notice that most of the seeds have sunken to the bottom of the bowl and the loose membrane will float on the top. Remove any stray pieces of membrane, and drain all the water.

Pour the arils into a high-speed blender or food processor, and pulse or gently blend until all the arils have been crushed.

Strain the juice through a fine-mesh strainer. Use a spatula to press down on the purée so that you can squeeze out as much juice as possible.

Right, we now have pomegranate juice. On to making the molasses! 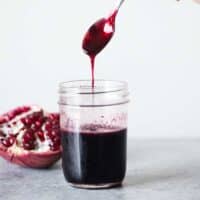 How To Make Pomegranate Molasses

Did you make this recipe?Tag @hellolisalin or leave a star rating and comment on the blog!
Cuisine: Middle Eastern
Category: Basics

*Note: This recipe was originally published in 2014 and has been republished to updated photos and the headnote.