These easy baked Thai shrimp wontons are definitely a crowd pleaser. Yes, you can make crispy wontons without frying them!

Now that I’ve flipped my calendar to “November,” my mind can begin to digest the holiday season. By the way, even though we’re in November, it’s not time for Christmas yet. So, Best Buy, Michaels, and every other retail store, can we please hold off on the Christmas commercials and ads until I’ve had my turkey and pumpkin pie?

When I lived in the East Coast, I never went home for Thanksgiving because (1) I had to start studying for finals and (2) holiday plane tickets are ridiculously expensive! (<— Nothing new there.) Instead, I celebrated friends-giving. Even though I have moved back to California, I want to keep this friends-giving tradition alive, so I’m planning 2 food-centric gatherings. Why have one when you can have two, right? But really, I’m just looking for any excuse to gather my friends together to eat. Bring on the stretchy yoga pants!!

Have you ever tried Trader Joe’s Thai Shrimp Potstickers before? For frozen potstickers in a bag, they’re pretty darn good. These baked Thai shrimp wontons are inspired by those TJ potstickers I ate a month ago when I was too lazy to cook. Yes, food bloggers eat frozen meals, too. Once in a while . . .

I haven’t actually decided which dishes to make for my friends-giving meals yet, but these shrimp wontons might make an appearance. And by the way, it’s definitely not weird to have shrimp for Thanksgiving. My Thanksgiving dinners growing up were seafood affairs, with the occasional appearance of a soy sauce chicken. Mama Lin was not accustomed to the big bird.

Folding these wontons are not as intimidating as it looks! All you’re doing is just gathering up all the corners and sealing the dumpling by pinching the edges together. The “X” shape just magically appears! If you want to practice the folding technique before making these wontons, just cut out a sheet of square paper and fold away. 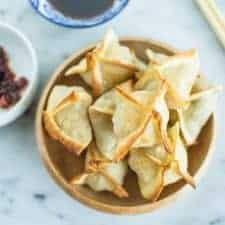 Did you make this recipe?Tag @hellolisalin or leave a star rating and comment on the blog!
Category: Appetizer

A look into the produce in my refrigerator . . .