Moist, fluffy banana bread topped with a luscious chocolate swirl. You won’t believe that this delicious treat is gluten-free!

Spotted or not spotted, that is the question. For me, bananas are best consumed when they have a couple spots on them. Not quite dalmatian-style, but enough to indicate that the banana has lost most of its starchy texture. I have friends who prefer bananas with a bit of green on the skin. I think they’re crazy. But when I have bananas that look like this, I know it’s time for a baking session:

Initially, I wanted to make a cinnamon chocolate swirl for the banana bread. A few weeks ago, I fell in love with Joanne’s recipe for chewy cinnamon white chocolate chip coconut cookies at Eats Well With Others. The recipe called for cinnamon chips, something I had never heard of. I was on a quest for them last week, but alas, none of the supermarkets I frequent carried these cinnamon morsels.

When it came time to baking, I thought, wouldn’t it be great if I added a cinnamon chocolate swirl to the bread?! Cinnamon + chocolate perfectly co-existing. I was sold on the idea, so I melted a 1/2 cup of chocolate chips and added a tablespoon of ground cinnamon to the sauce. Next, the moment of truth—the taste test. The verdict: a disappointment. The cinnamon flavors were muted by the semi-sweet chocolate chips. The chocolate certainly tasted different, but not enough for me to detect cinnamon in it.

Even though the cinnamon chocolate experiment wasn’t a success, the final version was wonderful! Oh, and did I mention that it is gluten-free? 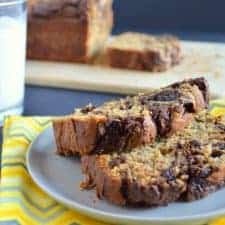 1. Lining the pan with parchment paper is not essential, but the bread will come out of the loaf pan easier. I cut a sheet of parchment paper long enough to cover the bottom and 2 sides of the pan, lengthwise. I added 2 smaller sheets for the shorter sides.br]2. If you want a true marble bread, add dollops of chocolate between layers of banana batter.[br]3. When it comes to melting chocolate, the microwave is my best friend. If you don’t have a microwave, try this [water bath method from the The Kitchn. Of course, a double boiler works as well, but most of us probably don’t have that in our homes.[br]4. If psyllium husk is difficult to find, just leave it out of the recipe. I included it in the bread to make the flour bind together a bit more. The taste of the bread will not change.
Did you make this recipe?Tag @hellolisalin or leave a star rating and comment on the blog!
Category: Breakfast, Dessert, Gluten Free, Snack