This gluten-free Dutch baby is made with rolled oats and it’s high in protein! It’s very easy to prepare: just pour batter into a hot skillet and bake for 20 minutes! Top it with fresh orange slices or your favorite fruit.

Now that citrus fruits are in season, I am buying all the blood oranges and cara cara oranges that I can get my hands on. Lately, I’ve been making a lot of Dutch babies for breakfast and topping them with fresh slices of oranges.

WHAT IS A DUTCH BABY?

A Dutch baby, which is sometimes called a German pancake, is a large, fluffy popover that’s cooked in a hot skillet. It’s usually made of flour, eggs, milk, sugar and some spices and served for breakfast. Often times, they’re served with a generous dusting of powdered sugar and a bit of lemon juice.

HOW THIS VERSION IS DIFFERENT

Unlike traditional Dutch baby recipes, I blend rolled oats (instead of white flour) with milk and eggs. Not only is it a nice gluten-free alternative, but I prefer eating oats in the morning because it’s healthier and it keeps me full. This gluten-free Dutch baby doesn’t rise quite as spectacularly as traditional Dutch babies, but the batter does puff up a little on the edges. You’ll still end up with a nice, fluffy oven baked pancake.

One of the big reasons why I like this recipe is the simple preparation: heat a skillet in the oven, blend the batter, pour it into the hot skillet and bake. That’s it! Top it with oranges or your favorite fruit and enjoy! 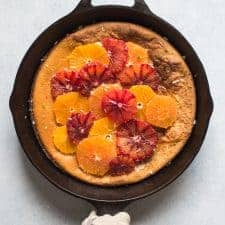 This gluten-free Dutch baby is made with rolled oats and it’s low in sugar! I topped it with fresh oranges, but you can also try fresh berries, thinly sliced apples or pears.If you don’t have maple syrup, you can substitute it with runny honey or your favorite liquid sweetener.
Prep Time10 mins
Cook Time20 mins
Total Time40 mins