Home › How To Guides

How to Cut a Pineapple

Here is a step-by-step tutorial + video on how to cut a pineapple! Make sure to use a sturdy knife. You can use the fresh pineapple for fruit salads, smoothies or my pineapple fried rice!

Quick Links: How to pick a ripe pineapple

I’m not ashamed to admit that I used to buy canned pineapple. The thought of having to rip through the tough exterior seemed like too much work. But what bothers me about canned pineapple is the extra sugar. I’m not the biggest fan of soaking fruit in sugary syrups. Even brands that claim to soak pineapple only in its own juices seems too sweet for me. Eventually, I got over my apprehensions and figured out how to cut a pineapple.

It’s actually a lot easier than you think! The entire process usually takes me about 10 to 15 minutes. All you need is a good sturdy knife a bit of patience. Follow along my step-by-step tutorial and video on how to cut a pineapple, and you’ll be a pro in no time.

Ideally, you want a pineapple with golden colored skin. A few small green patches at the top is okay. Often times, the pineapple I buy at the supermarket are still green on the outside. I usually leave the pineapple on the counter for several days and wait for the pineapple to ripen into a nice golden color. You may notice a bit of mold forming at the bottom of a ripe pineapple, but don’t worry about it. You will be slicing off that bottom part anyway. 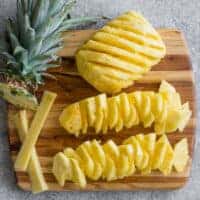 How to Cut a Pineapple

(Side note: The pineapple that I’m using in the video is actually a little underripe for me. I usually wait until it’s much more golden on the outside. However, the leaves usually dry up and turn golden too, which doesn’t look nice for photographs or videos.)