This strawberry rhubarb chia seed jam is an easy, naturally sweetened jam that is made with only 6 ingredients: strawberries, rhubarb, ginger, maple syrup and orange juice!

This is an updated version of the recipe that was first published here in May 2015.

One of my favorite spring ingredients is rhubarb. On its own, the faint tart flavor of rhubarb is rather unremarkable. But throw rhubarb into a dessert, and it will add a lovely brightness to the dish. For whatever reason, in the U.S., rhubarb is most commonly paired with strawberries. In the U.K., I’ve noticed, it’s rhubarb and ginger. I suddenly realized this when I watched an episode of the Great British Bake Off, where nearly 4 contestants were making something with rhubarb and ginger.

Well, I decided to meld together the best of both worlds by adding strawberries, rhubarb and ginger into this jam. I like making chia seed jams because the chia seeds act as a natural thickener. You won’t need to use as much sugar to thicken the jam! 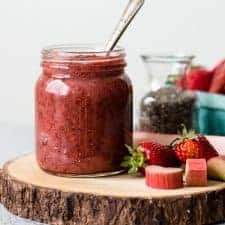