Ever tried golden beets in a frittata? It adds a pleasant sweetness that lightens up the entire dish. Ready in less than 40 minutes!

I’m a big time multi-tasker. Not necessarily an effective one, but I wear that badge with pride. I brush my teeth while packing my gym bag, pin photos on Pinterest while browning my onions, and do the tree pose while editing food photos. Yup, tree pose, as I write this. Time sweeps me by so quickly that I feel like I need to do two things at once just to keep up with the pace.

Even as I was preparing for this post, I was busy multi-tasking. I was ogling over Anna Kendrick’s red carpet dress at the Oscars, wondering if I would pull off emerald green like Scarlett Johansson, marveling at Common and John Legend’s soul-moving performance of “Glory”, and cheering after Lady Gaga’s “Sound of Music” tribute plus Julie Andrews cameo, all while cooking and writing about this frittata. My multi-tasking effectiveness rating: probably 5 out of 10.

Last weekend, I went on a quick getaway trip with my college buddies to San Diego for good beer and burritos. We’ve known each other for 10 years now, and score—we’re not sick of each other! Life victories. Secretly, I wish that someone would have taken a photo of all of us together while we were still at school because the diversity of our group is so front-cover-of-a-college-brochure worthy. Truth, I tell you!

From the moment I touched down on San Diego, I was whisked away to a brewery where my weekend carb-cation began. AleSmith, Ballast Point, Hodad’s, Bakery & Cie, and Lucha Libre: all solid spots to make a pit stop if you’re in the area. Fun fact: I chowed down on my bacon cheeseburger at Hodad’s while staring at an autographed poster of Guy Fieri. More life victories. After a weekend of the quadruple Bs (beer, burritos, burgers, and bread), my body was ready for another round of de-carbing. I know, we’ve been having a lot of those around here lately.

I named this recipe a “swiss chard and golden beet frittata,” but between you and I, this should really be called the “whatever I found in my fridge frittata”: eggs, half a bunch of swiss chard, half a block of habanero jack, a small golden beet, and less than a cup of milk. It was a frittata waiting to happen, but also an ominous sign that I need to head over to the grocery store.

Golden beets in a frittata sound strange? Don’t be afraid. The sweetness of the beets work so well with cheese and the sharp flavors of sun-dried tomatoes. I dusted off my spiralizer after months of neglect to prepare the beets, but you can easily shred the beets with a grater, too.

I’m beyond happy that this frittata was so fuss-free because I had Oscar red carpet priorities. Simple prep, minimal cooking time on the stove, and finishing in the oven. A somewhat classy dinner for a classy awards show. 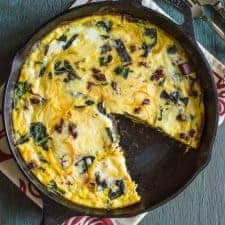 SUBSTITUTIONS: Don’t have swiss chard or golden beets? No worries! Substitute them with spinach, kale, red pepper, or shredded carrots.
Did you make this recipe?Tag @hellolisalin or leave a star rating and comment on the blog!
Category: Breakfast, brunch, dinner, Gluten Free, lunch