Cherries are the harbingers of good news. When those little rubies make their appearance, I know it’s almost time to break out my dresses, sandals, mini paper parasols for iced cocktails, and that itsy bitsy teenie weenie yellow polka dot bikini. (Just kidding, I don’t actually own one.) Well, those cherries are coming out, which means summer is around the corner, friends! Let’s start brad pittin’ those cherries.

The Recipe Redux theme for this month is DIY kitchen essentials—kitchen staples that I bought in the past but now make from scratch. This might sound weird, but barbecue sauce is definitely a staple around my house.

Actually, that wasn’t always the case. It took me YEARS before I could bring myself to like barbecue sauce. I shake my finger at family barbecues and school outings. I don’t know what sauce they used, but I dreaded eating ribs that were slathered generously with vinegary red-brown barbecue sauce. It wasn’t until I discovered barbecued chicken pizza that I realized not all barbecue sauces are created equal. That was an important lesson in life.

Barbecue sauce has saved my behind so many times in the last few years. You see, cooking dinner is the last thing I want to do sometimes. Shocking, but it’s the cold hard truth. On those lazy days, I usually throw chicken or salmon on a baking sheet, rub them with seasonings, bake and finish with some nice barbecue sauce on top. Or, I would spread sauce on a piece of naan, dress it with cheese and fixins, bake it, and I end up with the crispest thin crust barbecue pizza. Flavorful dinners in less than 30 minutes, courtesy of my old friend, the barbecue sauce. What would I do without that around?

Not too long ago, I started making my own barbecue sauce. My sister would probably say, “Why bother? Just buy it from the store!” Well, the store bought stuff has way too much sugar. I’m saving the sugar for dessert.

I’m also trying to watch my refined sugar intake lately. Does that mean no more cookies?? Hardly. I still gotta live, after all. But I will try to cook more with natural sweeteners, like fruit juice and coconut sugar.

When I was looking up recipes to make barbecue sauce, I was astonished by how much sugar goes into making 2 cups of sauce! So instead of sweetening this barbecue sauce with sugar, I used pear juice and relied on the natural sugars from tomatoes and cherries. I was NOT at all disappointed with the results. It was so tasty, I had to stop eating it straight from the spoon!

To make this sauce, I highly suggest getting yourself a cherry pitter. You don’t want to be going at these with a paring knife, unless you have hours to spare and you don’t mind if someone catches you red handed.

I bought this OXO cherry pitter, and it’s the best investment I’ve made in a while! It shoots those cherry pits out like it’s nobody’s business. If you’re ever cooking something that involves using too many cherries to count, you’ll probably want to drop a few bucks to get this. But if you don’t want to buy another gadget (and I completely understand), I heard about a trick from a recent Splendid Table podcast. You take an empty wine bottle, place a cherry on top, and stick a chopstick down the center of the cherry. The pits are supposed to shoot right down the bottle. I haven’t tried this myself, but it sounds like it might work!

So are you ready to grab a bag of cherries, make this barbecue sauce, and welcome summer with open arms? 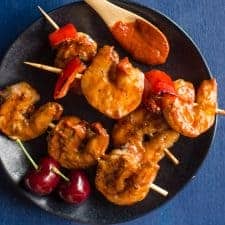 This cherry bourbon barbecue sauce is rich in flavor without the sugar. It will make anything finger-lickin’ good! Makes about 2 cups.
Prep Time30 mins
Cook Time25 mins
Total Time55 mins