Chicken cubes and root vegetables wrapped in a flaky dough. These hearty pasties are sure to keep you warm and full this winter!

Cornish pasties: not to be confused with pastis (because I’ve done that before); one massive portable pie that is about half the size of my face; a flaky, meaty, carby delight that tops my “to eat” list when I set foot in England.

It may seem a bit silly that I’m getting so excited about a hand pie. We do have them here in the U.S., after all. But look at the expressions of unbridled joy when I have a piping hot pasty in hand. It was love at first bite.

For all you history nerds out there, the pasty shop in the picture on the far right was one of the locations where William the Conqueror stayed in Winchester. Yes, 1066, Battle of Hastings, when a Norman-French guy conquered England. I geeked out at the pasty shop.

For the longest time, I wondered how the people of Cornwall laid claim over the pasty. Apparently, no one truly knows where pasties came from. The pasty somehow worked its way into the English diet hundreds of years ago, then made its way through some Robin Hood stories and Shakespearean plays, and then became popular among the working people of Cornwall. This flaky hand pie definitely has been around the block.

According to the Cornish Pasty Association (yes, there is one), a “genuine” Cornish pasty must have the following ingredients:

Also, it can only be called a Cornish pasty if the filling was uncooked at when the pasties are sealed. Well, the pasties I made were not genuine Cornish pasties for reasons you’ll see very soon. But don’t let that deter you from making one of these half-moon pockets of gold.

To get the pasty experimentation started in my kitchen, I consulted Jamie. You know, the Naked Chef. I got a copy of Jamie’s Great Britain two Christmases ago, and it has taken me a while to crack open into this hefty book of bright and colorful British recipes. Many of the recipe names definitely caught my attention:

Amidst this delightful cookbook was the recipe I was looking for: Early Autumn Cornish Pasties.

As I read the opening blurb and directions of the recipe, I felt like Jamie was giving me a a good pep talk about how I will conquer this recipe. My favorite part of the recipe is when Jamie tells me to “confidently fold the pastry over the meat and vegetables.” To be honest, as I lifted the edges of the dough to seal the pasty, I had serious doubts about whether it was all going to work. I had visions of dough ripping everywhere as the filling bursted through the seams. Then, I remembered what Jamie said and folded that baby with confidence. Success! 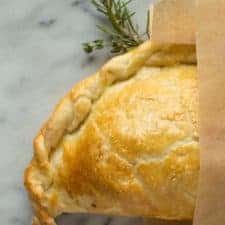 Adapted from the Early Autumn Cornish Pasties recipe from Jamie Oliver’s Jamie’s Great Britain.
Did you make this recipe?Tag @hellolisalin or leave a star rating and comment on the blog!
Category: dinner, lunch

Note: This post contains affiliate links, which means I earn a small commission when you buy products through those links. Thanks for supporting Healthy Nibbles & Bits!