When I lived in Nanjing nearly 10 years ago, I was introduced to a delicious garlicky cucumber dish known as 涼拌黃瓜 (liang ban hua gua). It was a very simple dish, merely cucumbers tossed with a marinade of garlic, vinegar, soy sauce, and salt. What surprised me was how addictive such a simple dish could be. I loved those cucumber chunks in all of their garlicky splendor.

In China, this dish is often prepared with chunks of cucumber that are smashed with a meat cleaver. I decided to slice the cucumbers instead because I like eating them as delicate slivers. Many recipes I’ve seen also use Chinkiang (or Zhenjiang, 鎮江) vinegar, which you can find in Chinese supermarkets. I used rice vinegar here instead because it is much easier to source. The standard rice vinegar you find at supermarkets won’t have the same malty notes as Chinkiang vinegar, but it still works well in this recipe. 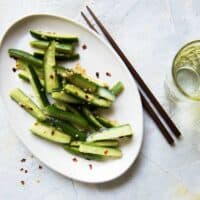