This coconut Kahlúa hot chocolate recipe is a great way to stay warm during the winter!

This coconut Kahlúa hot chocolate recipe is a great way to stay warm during the winter!

Happy new 365 days, everyone! While many of you were busy sipping away your New Year’s Eve champagne, I was busy getting my Indian food on. And while you were getting ready to count down the last seconds of 2014, I was waking up from my curry-induced nap just in time for the countdown. Is that a sign of me getting old?

As it’s the new year, we need to talk food resolutions. I’ve come up with a few:

Cooking with alcohol is one of those things that I don’t do enough of. Yes, I know I did just come up with some Kahlúa snack bites recently, but that’s about it! In the new year, I want to experiment with a few more mixed drinks, steep some meats in good ol’ wine, and bake some fantastic rum desserts. Where should I begin?

I think the first time I feel like I “graduated” during my drinking career was when I added small amounts of liqueur to my coffee. Gone were those days of drinking Keystone Light and shots of very cheap alcohol. Drinking became a tasteful venture, and I didn’t just drink to get drunk. Admit it, we’ve all been through that phase. Adding a dash of Kahlúa to my hot chocolate not only tastes good, but it reminds me how much my taste for adult beverages have evolved.

Cheers to the new year and fulfilling my food resolutions! 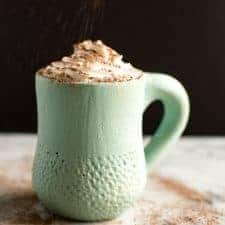 Did you make this recipe?Tag @hellolisalin or leave a star rating and comment on the blog!
Category: Dessert, Drinks, Vegan