What makes these rosemary roasted potatoes so good? The potatoes are cooked in bacon fat! We’re all entitled to a bit of decadence on a Friday.

I’m keeping things short and sweet today because what I’m about to talk about needs no long introduction: bacon. That crispy, salty, curly-when-fried cured meat that I don’t usually care for but desperately craved the other day. And when I say bacon, I’m referring to those strips that are half fat, half meat. There is no room for that imitation turkey stuff. Not today.

You’re going to want to use some pretty fatty bacon. Mine had about a 60-40 fat-to-meat ratio. This way, you’ll actually have enough fat for roasting potatoes. It’s the weekend. We’re allowed to let loose  and cook our potatoes in bacon fat if we want to.

Speaking of frying bacon, did you catch this study several months ago on why bacon smells so good? As it turns out, there are about 150 organic compounds that are activated when that fat hits the hot pan. No wonder my apartment smelled like bacon for hours! 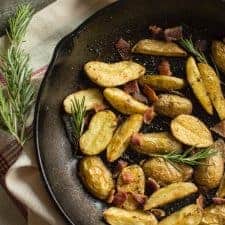 I found that 2 strips of thick bacon produced enough grease for the potatoes. If you want a bit more, use 3 strips.
Did you make this recipe?Tag @hellolisalin or leave a star rating and comment on the blog!
Category: Gluten Free, Sides