Rudolph the Red-Nosed Reindeer,
Had a small cranberry nose,
And if you ever saw it,
You would even say it glows.

Disclosure: By posting this recipe I am entering a recipe contest (Krusteaz Gluten-Free Blogger Bake-Off) that is sponsored by Krusteaz. I am eligible to win prizes associated with the contest, and received products to develop this recipe. As always, all opinions expressed are my own, and I only recommend products that I truly enjoy. Thanks for supporting the brands that keep me going in the kitchen!

Rudolph the Red-Nosed Reindeer,
Had a small cranberry nose,
And if you ever saw it,
You would even say it glows.

It’s true. If you hold up one of these Rudolph pops against a light source, you’ll notice that the cranberries do “glow” a little.

Rudolph has a special place in my heart because I had to sing about him during a 5th grade winter concert. Tell me, who hasn’t been forced to sing Christmas songs (or any well-known children’s song) in front of a large group of parents? I’m not exactly tone deaf, but I doubt that I belted out a Beyoncé-like performance. Thankfully, camcorders and mobile phones with video-recording capabilities weren’t prevalent back when I was a kid. Otherwise, there would be a huge library of embarrassing footage of myself that I may want to burn.

Yes, gluten-free brownies! Some of you may be familiar with Krusteaz baking mixes already, but they just came out with a gluten-free line! The new line includes:

A lucky winner will get to try all of these mixes! Details about the giveaway below. So far, I’ve tried the honey cornbread and the brownie mixes and they both taste great. Actually, the brownies are phenomenal! They’re fudgy, filled with chocolate chips, perfectly sweet, and have that thin crispy top layer that all good brownies must have. By the way, I snuck in many bites of these delicious brownies as I’m wrote this post so I can describe them properly. Really, I’m doing this for you.

When I was invited to participate in the Krusteaz Gluten-Free Blogger Bake-Off, I knew I wanted to do something with the brownies. I’m a sucker for anything with chocolate, as you well know. After weeks of pondering, I finally came up with the idea for these Rudolph brownie pops. I’m not going to lie, this is a 2-day kind of kitchen project. But considering how cute the final product looks, your efforts will be well worth it!

Notes for the brownie pops:

1. For the brownies, I made them more cakey by using two eggs instead of one (the package suggests using one). I thought that the cakier texture would be better for shaping into cake balls. Before crumbling up the brownies, I sliced off that crusty top layer from the brownies, which I subsequently ate (YUM). The crusty top layer to make the ball-shaping easier. Also, when you’re dipping the brownie balls, you want to work with 2 balls at a time. You want to keep them relatively cold so that the melted chocolate sets faster.

2. To make the googly eyes, I adapted this recipe from Fork & Beans. I replaced the corn syrup with brown rice syrup and used almond milk, which worked fine. You’ll definitely need to prepare these a day ahead so that the eyes have time to set. If you don’t want the hassle, feel free to use white chocolate chips instead!

For some reason, the googly eyes made me think of Big Brother.

4. Your fingers/lollipop sticks will be covered in chocolate. Just accept it now. 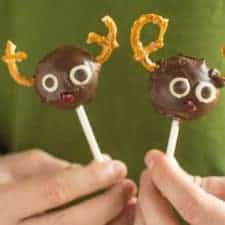 1. Googly Eyes adapted from Fork & Beans.[br]2. Make sure that you’re using a relatively thick sandwich bag for piping the googly eyes. Thinner bags with a seam at the bottom will burst (as I discovered).
Did you make this recipe?Tag @hellolisalin or leave a star rating and comment on the blog!
Category: Dessert