We’re in the thick of winter, friends! At least, I think we are. I went out for a run in a tank top yesterday, so, who knows. Maybe I have my seasons all mixed up. Is it unseasonably warm where you are, too?

Whatever may be the case, I never need much of an excuse to make a good ‘ol hearty soup. And this Thai-spiced potato leek soup . . . it’s the mother lode.

I know, it’s not the first time you’ve seen a Thai-flavored soup here. But geez, that combination of ginger, garlic, lemongrass, and Thai chili works so well with a potato soup, too. One sip of this soup, and I was brought back to my childhood, to the jook (or congee) that Mama Lin spent hours making.

Of course, on a weeknight, I don’t want to spend hours cooking a soup! Good thing for us, this creamy beauty takes about 30 minutes and 8 ingredients to make. Guys, this soup is calling for you.

If you try this recipe, let me know how it goes by leaving a comment, rating it, or sending me a message! Or take a photo of the food and tag me on Instagram so that I can give you a fist bump. I love seeing your creations! 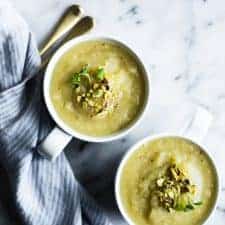 Did you make this recipe?Tag @hellolisalin or leave a star rating and comment on the blog!
Category: Gluten Free, Soup, Vegan