Juicy caramelized pears topped with a spiced pumpkin sauce. A simple, no fuss dessert to welcome the fall season!

Is it just me, or have pumpkin recipes been springing up earlier than usual? Everywhere I look, there seems to be another round-up of pumpkin recipes! I can’t complain—I’m loving it. Any dish with pumpkin in it is a dish for me!

One of the best desserts I’ve had at a restaurant was a caramelized pear a la mode. It’s so simple yet satisfying. Besides, I always feel less guilty when I’m eating fruit for dessert, even when it’s coated in sugar and topped with ice cream. Considering I have 3 pounds of ripe pears to reckon with at the moment, that caramelized pear dessert became an immediate inspiration.

Instead of adding a dollop of ice cream, I made a super simple pumpkin sauce that’s filled with pumpkin pie spices. That’s right, I hopped on the pumpkin recipe bandwagon. 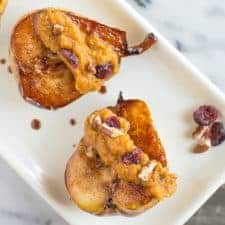 i]1. *If you don’t have any coconut sugar, just substitute it with regular cane sugar.[br][br]2. Caramelized pears adapted from [this recipe from Bon Appétit.
Did you make this recipe?Tag @hellolisalin or leave a star rating and comment on the blog!
Category: Dessert, Gluten Free, Vegan