These churro waffles are sprinkled generously with cinnamon and sugar and topped with an easy homemade cayenne whipped cream! Perfect for brunch!

I’m writing this post as I sit in one of the darkest sports bars I’ve ever frequented. I managed to pick the seat under the AC vent, and I’m freezing my toes off. The bar is lit only by neon signs, lights above pool tables, and the bursts of color coming from the seven television screens. The faint smell of cigarette smoke cuts through the air and assails my nostrils.

There is a woman standing by the jukebox, selecting 90s rock songs as she sways her hips to her own rhythm. Power to her for finding a way to dance to those tunes. She takes a short break from her arhythmic dancing to clap her hands and scream “COME ON, JUNIOR!” NASCAR is on television.

Then, there’s me, dressed like I’m about to go to the gym. The strange drinker sitting at the bar with a pen and paper in hand, attracting furtive stares from every corner of the room. This feels like just the perfect place for me to write a Cinco de Mayo recipe post.

Cinco de Mayo, like St. Patrick’s Day, is a holiday I used to celebrate for the sake of drinking. Now, I mark it on my calendar for the sake of creating holiday-themed recipes. Another sign that I’m getting one year wiser.

The very first Cinco de Mayo themed meal I ever cooked involved chicken tacos and homemade churro chips—lightly fried slices of tortillas with a generous coating of cinnamon and sugar. When it comes to frying chips, there’s a fine line between a nice golden brown and a “spent too much time on a tanning bed” kind of brown. I wasn’t on top of my game, and I couldn’t keep those dang chips from over-browning. This year, I’m tossing that whole frying business out of the equation. We’re making waffles.

KITCHEN TIP: HOW TO MAKE WHIPPED CREAM IN A JAR

I learned a neat new trick that I’ve been aching to share with you: making whipped cream out of a mason jar. No equipment required!

I wish I came up with this on my own, but I first saw this trick on Food and Wine‘s website and found the recipe on Parade’s Community Table. Instead of using your handy dandy mixer, you’re going to incorporate air bubbles into heavy whipping cream by shaking a jar vigorously. It will be a workout. Primary muscles worked: biceps. Secondary muscles worked: triceps. No joke.

Some recipes say that you can make the whipped cream in 45 seconds, but it takes me around 5 minutes to get the right consistency. Maybe I need Popeye arms. But when you’re making this whipped cream (and I know you will), focus more on how the heavy whipping cream feels and sounds in a jar instead of focusing on time. The whipped cream will be done when you no longer hear liquids jostling around in the jar, and you can feel like you’re shaking a very thick cream.

And in true Cinco de Mayo fashion, I spiced this baby up with cayenne and cinnamon. The cayenne won’t burn your lips off, I promise. You just feel the tiniest quick right at the end. I prefer using 3/4 to 1 full teaspoon of cayenne in here, but 1/2 teaspoon works just fine, too.

So, what are we waiting for? Let’s eat! 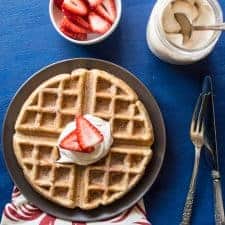 These churro waffles are sprinkled generously with cinnamon and sugar and topped with an easy, creamy homemade cayenne whipped cream! Leftover whipped cream can be stored in a jar for up to a week.
Prep Time20 mins
Cook Time7 mins