These curried potato fried dumplings are so dang tasty. They’re light and crisp on the outside and packed with curry flavor on the inside. Folding these dumplings is simple, too. Be warned, the fried dumplings are addictive! For those of you who prefer baked dumplings, see the headnote in the recipe.

I can’t believe this is the first time I deep fried anything on the blog! I know it’s not exactly the healthiest way to cook, but hey, we all need to live a little, right?

After shooting one of my dumpling pleating videos a few months ago, I had a lot of dumpling wrappers leftover and was figuring out what to do with them. Taking inspiration from samosas, I decided to make fried dumplings with a curried potato filling. I mixed onions, garlic, ginger, peas, diced bell pepper, scallions, and mashed potatoes and seasoned everything with salt and a mild yellow curry powder. As far as the dumpling filling goes, the list of ingredients is quite short. However, the flavor is absolutely delicious.

For the dumpling wrappers, choose circular wrappers that aren’t too thick (i.e., don’t use thick potsticker wrappers). You want the dumplings to be light and crisp on the outside, and that is better achieved with thinner wrappers.

I know that many of you prefer baked dumplings over fried ones, so I included instructions for baked dumplings in the headnote. Personally, I prefer the fried dumplings because the entire wrapper gets browned and crisp. The texture of the fried wrapper is a great contrast to the soft potato filling. When you bake the dumplings, only the folds on the top of the dumplings will get crispy. The bottoms brown too, but it is not as crispy as I’d like. My husband thought that the baked dumplings were fine, but I am much more picky when it comes to dumplings.

(The dumplings on the right are baked.)

COOKING NOTES FOR THE FRIED DUMPLINGS 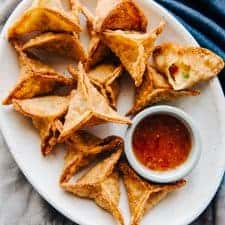 When I pour the oil in my wok, the oil is about 1 1/2 inches to 2 inches deep. If you are using a pot with a wide bottom, you may need to use more oil. Don’t forget that you’ll flip the dumplings the brown them, so you shouldn’t need a ton of oil for this.
Did you make this recipe?Tag @hellolisalin or leave a star rating and comment on the blog!
Cuisine: Asian
Category: Dumplings