Here’s how I came to be sitting in the middle of a cafe in England, drinking a cappuccino and watching a woman teach me how to fold underwear properly.

A few weeks ago, I found 5 meat thermometers in my kitchen drawers. Guys, FIVE! What on earth was I doing with all of those? That discovery got me on a roll, and I started pulling open other drawers to unearth what lurked within the depths of my kitchen.

Here’s some of what I found: boxes of spices that are still unopened, bags of grains and cans of beans that have never seen the light of day, red and green candy melts that I’ll never use. I’ve only been in my new home for three months, and I’ve managed to fill it to the brim with unnecessary things. I need to clean up my act, literally.

So I picked up Marie Kondo’s, The Life-Changing Magic of Tidying Up, after hearing about her miracles with decluttering even the messiest abodes. I don’t consider myself messy, but I own too many things, and they sure get in the way of my creative vibes. I’m only a third of the way through Kondo’s book, and I can already picture myself walking around the house, discarding things don’t “spark joy” (<— that’s the KonMari standard).

The most surprising part is that I’m geeking out about folding my clothes!! The KonMari method is not to stack up your folded clothes, but to fold them in a special way and line up the bundles next to each other inside your drawer. When you pull it open, you’ll be able to every piece of clothing all at once. That’s genius.

I’ve been boring the hubs about this book for the last few days, and he thinks it’s all a bunch of nonsense, or “hippie voodoo stuff,” as he calls it. But I’m buying into the KonMari. Considering that my home is the place that I live in and work from, I want to try my best this year to make it comfortably habitable.

In the spirit of cleaning things up, I made this eggplant bliss bowl with mint and cilantro chutney, which I’ve adapted from Tony Singh’s cookbook, Tasty. I got the book over Christmas, and it’s filled with recipes for irresistibly delicious grub. What I like most about this eggplant bliss bowl is that it tastes light and clean, but it doesn’t skimp on flavor. The sauce is versatile, so feel free to make it for a hearty dinner or use it to flavor your egg scramble in the morning!

If you try this recipe, let me know how it goes by leaving a comment or sending me a message! Or take a photo of the food and tag me on Instagram so that I can give you a fist bump! I love seeing your creations! 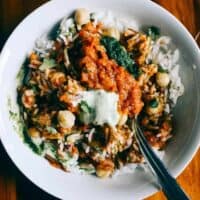 NUTRITION INFORMATION: Makes 4 Servings. Amount per serving: Calories: 458, Total Fat 7.2g, Saturated Fat: 1.3g, Sodium: 439mg, Cholesterol: 1.9mg, Total Carbohydrate: 86.5g, Dietary Fiber: 14.5g, Sugar: 17g, Protein 15g 1. Stovetop Method: The biggest difference between this method and the method described above is how you prepare the eggplant. First, peel outer skin of the eggplant. If you don’t mind eating the eggplant skin, leave it on. Slice eggplant into 1/4-inch thick rounds. Lay slices over paper towels, and sprinkle some salt over them. Set aside for 15 minutes, and wipe down excess moisture. Chop eggplant into 1/4-inch cubes. Heat oil in sauté pan, and onions and cook for a few minutes. Then, add eggplant and cook for 5 minutes before adding red peppers. Cook for another 5 minutes, or until the eggplant looks softened. Add remaining ingredients for eggplant sauce, and cook for a few more minutes before turning off the heat and blending everything. 2. *For the UK: Double-concentrated tomato paste is the same as tomato puree in a tube. 3. **For the UK: The broiler is the same as the grill in your oven. 4. The nutrition information is an approximation of 1 of 4 servings.

Disclosure: This post contains affiliate links. The immersion blender is an essential tool in my kitchen, and it’s great for blending small batches of food.