This grilled corn salsa is perfect for parties and gatherings. You don’t even need a barbecue grill to make it! All you need is your gas stove and metal tongs to grill the corn. Be warned, this salsa is quite addictive!

Back when I was in high school, I tasted Indian roasted corn on the cob for the first time at a friend’s birthday party. His family fired up some corn on the grill, and I remember one of his aunts handed me some halved limes and spices for the corn. I remember being very confused about what I was supposed to do. Mind you, the only corn I ate during that time was Mama Lin’s boiled corn or corn that came straight from a can (creamed corn was my favorite, by the way.)

My friend’s aunt showed me how I was supposed to eat the corn: first, I sprinkle some spices and salt on the lime, and then I rub the lime all over the corn. I was very skeptical about all of this. You know how teenagers are sometimes when they see new foods they’ve never tried before.

So, I did what she suggested, rubbing this lime that’s been muddled with red spices all over the corn, making a mess along the way. I finally took a bite, and you know what, it tasted great! I did go a little crazy with the spice, so the heat got to me a little. Once I opened my mouth and fanned my tongue a few times, I was ready for more. (Side note, why do we always do that when we eat spicy foods anyway?!)

I thought of this experience a few weeks ago, and it inspired me to make this grilled corn salsa. Initially, my idea was to grill corn on the cob and rub all the spices on the corn first before slicing off the kernels, similar to what I did at my friend’s party. After trying different cooking methods, I realized that mixing all the ingredients inside a bowl was a better way to distribute all the spices, so, that’s what I’m sticking to!

One of the key ingredients in Indian roasted corn is chaat masala, which isn’t easy for me to find. That’s why I just used whatever spices in my pantry to flavor the salsa. It’s not exactly Indian roasted corn, but it still tastes great! 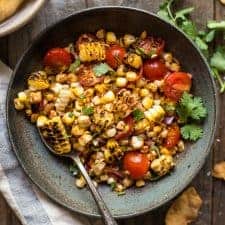 NUTRITION INFORMATION: Amount For 1/8 of Recipe: Calories: 80, Total Fat 1.2g, Saturated Fat: 0.3g, Sodium: 193mg, Cholesterol: 0mg, Total Carbohydrate: 17.7g, Dietary Fiber: 2.3g, Sugar: 6g, Protein 3g If you don’t have cherry tomatoes, feel free to substitute them with whatever tomatoes you have on hand.
Did you make this recipe?Tag @hellolisalin or leave a star rating and comment on the blog!