Ever wondered how to make paneer? This paneer recipe is a simple step-by-step guide on how you can make this fresh Indian cheese at home. It is a lot easier than you think! 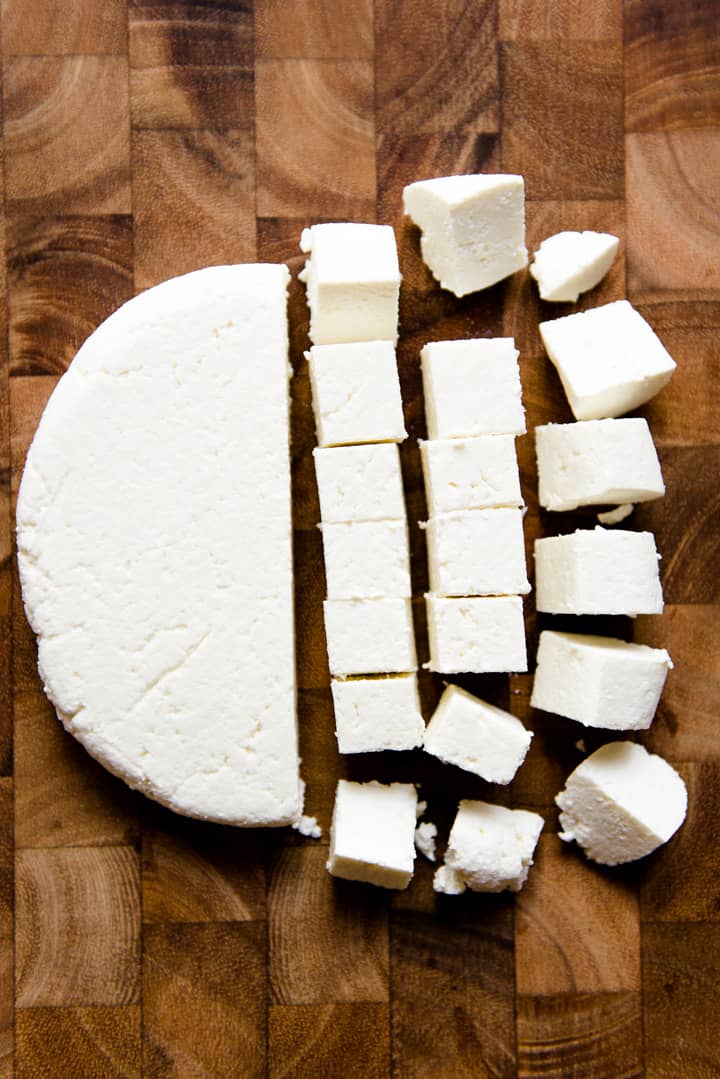 I fell in love with paneer when I was in college and ate my first saag paneer. It was one of the dishes I ate where I thought that meat wasn’t necessary to make the meal more delicious. I loved the soft and slightly chewy texture of the cubed cheese, and it was the perfect sponge for all the spices in the saag paneer.

Paneer is a fresh cheese that is very common in Indian cuisine. I never cooked with it until last year, when I made a fried paneer recipe from Madhur Jaffrey’s Vegetarian India. Part of the battle is finding a store that carries paneer in the first place. After some search, I managed to track down Gopi’s packaged paneer at Nugget Markets and the Sacramento Foods Co-Op at about $8 or $9 for a 12-ounce brick. It was pricey, so I decided to try my hand at making paneer at home. (Note: I later discovered a few Indian grocery stores around me that sold the same paneer at a cheaper price.) 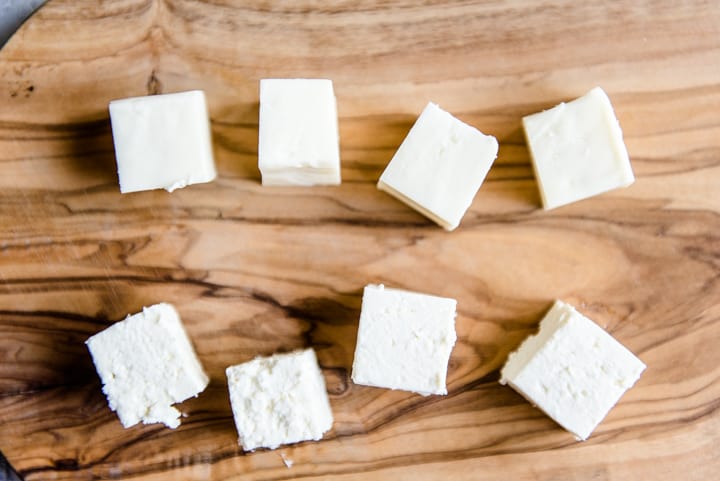 One thing that I didn’t expect from store-bought paneer was the difference in texture from fresh paneer. If you have ever eaten packaged halloumi, you’ll know what I mean. When you bite into the paneer, the cheese feels quite chewy, and it makes a little squeak against your teeth as you bite. I don’t mind that feeling at all, but not everyone enjoys it.

In the photo above, the top row is store-bought paneer, and the bottom row is homemade paneer. As you can see, the store-bought cheese is smoother, and it looks like mozzarella. Conversely, you can see a lot of texture in the homemade version (from the curds), almost like tofu. It is a lot more crumbly when you slice into it, too.

For the most part, I’ll stick to homemade paneer from now on because of the creamier texture. However, if I’m ever grilling paneer, I’d use the packaged version because the cheese is firmer and can better withstand heat.

COOKING NOTES ON HOW TO MAKE PANEER 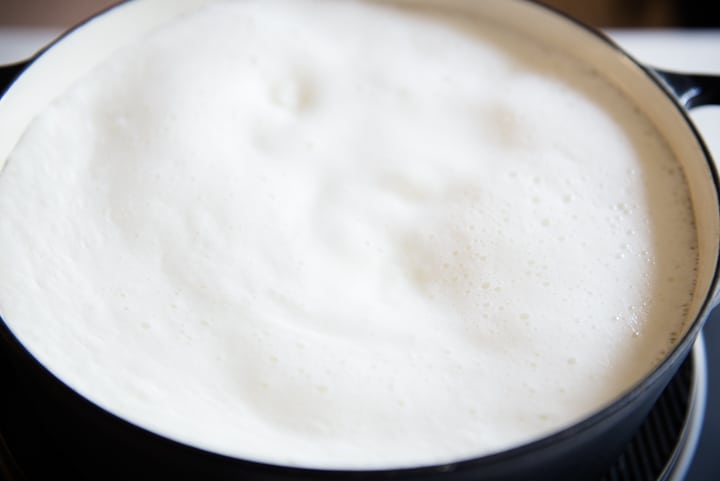 Making paneer at home is very easy. You want to start with whole milk because the texture of the cheese is creamier. Turn off the heat right when the milk boils. I usually boil the milk in a large pot with the lid on because it speeds up the boiling process. As a result, the milk tends not to burn on the bottom of the pot. The big issue with boiling milk with the lid on is that you need to pay attention to the stove. The milk can boil over quick and spill all over the stovetop.

Then, if you’re anything like me, you’ll forget about the spill and cook with the same hob soon afterwards. You’ll then start smelling something burning and then realize the area around the hob is dark brown from the burnt milk. Don’t make that same mistake. 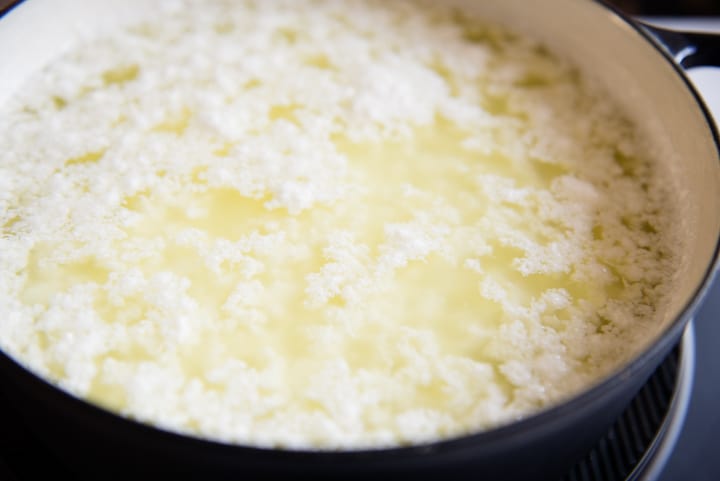 After the milk boils, pour in some lemon juice or vinegar. Give everything a stir, and the milk should start curdling immediately. The liquid will turn into a yellow/light-green color, especially if you use vinegar, but that’s completely normal. I usually let the the curds sit in the pot like this for about 5 to 10 minutes. It gives the liquid a chance to cool, too. Many recipes will say to add a few ice cubes into the pot to help cool everything, which you can certainly do as well. I haven’t noticed a significant difference one way or the other. 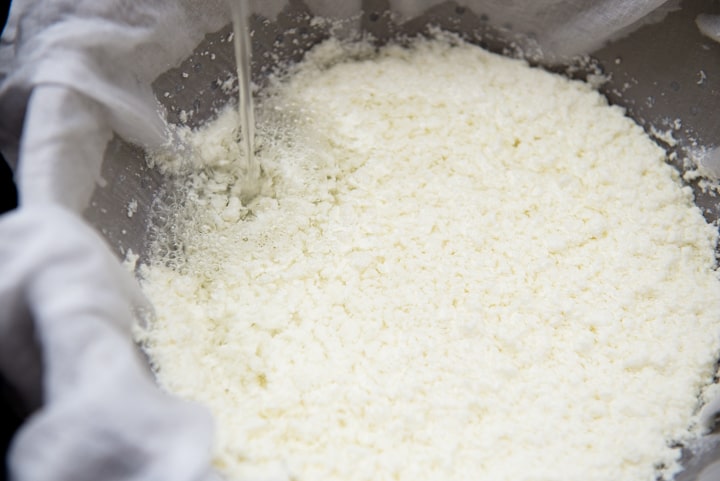 Next, you want to strain the curds through a cheesecloth and rinse the curds with cold water. This really helps to cool the cheese and it helps wash away the lemon juice or vinegar. 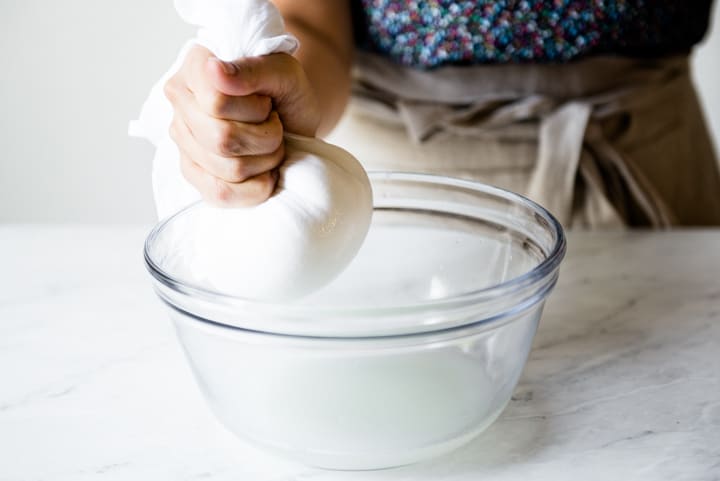 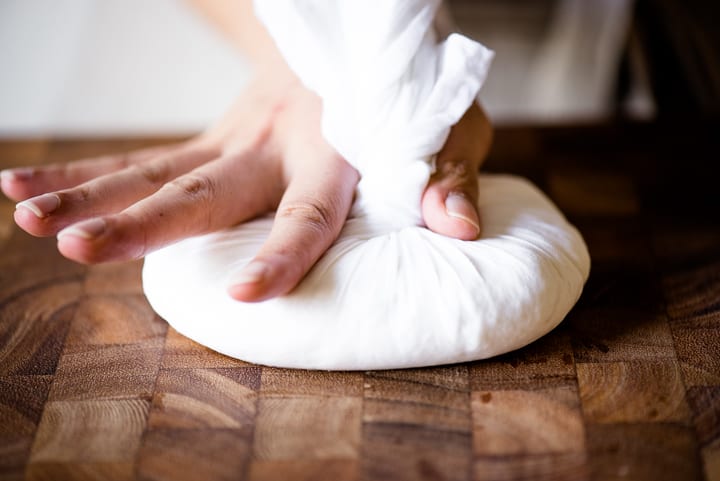 Then, gather up the corners of the cloth and squeeze out the excess liquid from the cheese. Many recipes at this point will instruct you to tie a knot on the cheesecloth and hang the cheese on your faucet to let more water drain. I have done this several times, and didn’t notice much more water dripping from the cheese, so I skip this step. However, I do press the cheese to release more liquid. 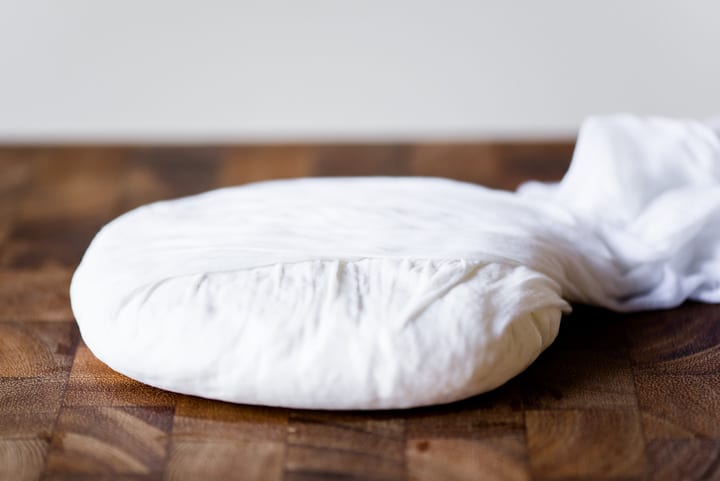 This is how my block of paneer looks like before I press it between plates. Notice how I lay the cheesecloth flat over the paneer. This helps create a more smooth, even surface on the paneer. Afterwards, I will place the block of cheese on a plate, place another stack of plates on top, and stick everything into the refrigerator. Some people like to place the cheese over a colander so that the water drips out from the bottom, but I don’t have one that’ll fit the cheese.

Refrigeration really helps firm up the cheese. Otherwise, the curds will crumble quite easily when you cut into the paneer or cook with it. 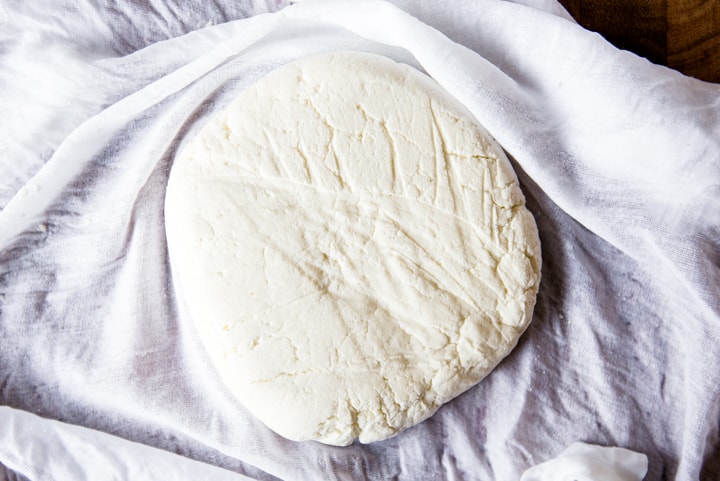 After an hour or two of pressing, your cheese should look like this!

If you are looking for more ways to cook with paneer, check out my spiced pan-fried paneer recipe or the tasty recipes from some of my favorite food bloggers below!

How to Make Paneer 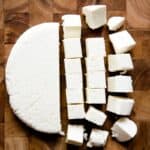 Try to consume the paneer within several days. I have cooked with the cheese about 6 or 7 days later, and it was fine. If you leave the paneer in the fridge for too long, it will start developing a light peach/pink color, and that’s a sure sign to toss it out.