Now that tomatoes are in season, I want to cook with them all the time. They have robust flavor and add a lovely hue to your dishes. One of my favorite things to cook with tomatoes is chicken tikka masala. “Tikka” in Indian cuisine refers to pieces of meat or vegetables marinated in spices. “Masala” refers to blends of spices in paste or powder form. Chicken tikka masala, then, is a dish of cooked marinated chicken pieces that’s bathed in a rich tomato sauce.

In this recipe, I make a vegetarian version using paneer instead of chicken. Although I use a number of spices in this paneer tikka masala recipe, it is simple to cook. The paneer has a lovely flavorful crust on the outside, and it pair so well with the masala sauce.

HOW TO MAKE PANEER TIKKA MASALA

The preparation for this paneer tikka masala is similar to chicken tikka masala in that you marinate the paneer in yogurt and spices. The yogurt helps coat the paneer pieces with spices. When you pan fry the paneer, the yogurt forms a thin crust around the exterior.

The paneer that you see in the photos are store bought. The brand is called Gopi, and I usually buy it from Nugget Markets or the Sacramento Co-Op. Although I make paneer often, it crumbles a lot easier than packaged paneer. Because this recipe requires marinating, pan-frying and simmering the paneer, I opted for paneer that’s a little sturdier. Feel free to use fresh paneer if you want!

You can do this step before or while you make the sauce. I usually pan fry the paneer first because they can burn easily (as you’ll see below).

A 14-ounce block of paneer will yield a lot of pieces, cook the paneer in two batches. After cooking the first batch, wipe down the pan with a paper towel to get rid any burned black bits.

By the time you get to the second batch, the pan will already be very hot. The marinated paneer splatters a lot when you place them on the pan, so be careful. Also, the second batch tends to cook a little quicker.

When I was preparing the paneer for these photos, I absent-mindedly scrolled through my phone while waiting for the paneer to fry. Before realizing it, I scorched the paneer (see photo above, right). You actually want the paneer to look like the ones in the left photo. I still ate all of it, but don’t make the same mistake I did!

By the way, you’ll inevitably have some yogurt marinade left over. Don’t throw it away! I usually add it to the sauce towards the end.

This step involves sautéing the onions and spices and simmering the tomatoes with liquid. In the photos, I used fresh tomatoes from the farmers market, but canned tomatoes work as well. Note that canned tomatoes tend to be more acidic, so you may need to add a little more sugar to the sauce to balance out the acidity.

Once you have cooked and simmered the ingredients for the sauce, you can leave the sauce as is or blend it in a high-speed blender. If you blend the sauce, the dish will look more like something you’d get at a restaurant. However, I’m also lazy sometimes and cannot be bothered to transfer everything to a blender. Choose whichever option you prefer. For reference, the first photo of this post features the sauce unblended; the photo above shows the blended sauce.

After you are done cooking the sauce, add the paneer back to the pan. Heat the paneer for 1 or 2 minutes and serve.

IS HEAVY CREAM NECESSARY FOR THE SAUCE?

Heavy cream helps balance the acidity of the tomatoes and gives the sauce a lovely creaminess. Many recipes call for a lot of heavy cream, and I have tried to keep the calories down by using only 3 tablespoons. If you are truly averse to heavy cream, use 3 or 4 tablespoons of whole milk yogurt. 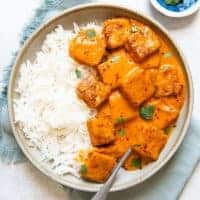 Pan fry pieces of paneer until golden brown and then bathe them in a rich tomato sauce. The paneer tikka masala is so good that you’ll want to lick the bowl!
Prep Time40 mins
Cook Time40 mins
Total Time1 hr 20 mins