Now that we’ve learned how to make pomegranate molasses, we need to use it! These roasted brussels sprouts have that wonderful tang and sweetness of pomegranates. You’re going to want this for Thanksgiving!

Think politics are divisive? Let’s talk brussels sprouts. You either love them (like me) or you hate them (someone who’s not my friend—I kid, I kid). There aren’t too many other foods out there that evoke such vehement opinions from people, though ouzo comes as a close second. I’m not sure where I stand on the ouzo divide.

If you’re like me, you have probably attempted to convince brussels sprouts haters to start appreciating this cute vegetable. You’ve roasted them with maple syrup, you’ve added melted cheese, you’ve shredded it all up, you’ve even tossed in some bacon bits. Nothing has worked.

For a friendsgiving several years ago, I decided to make some maple glazed brussels sprouts. Of course, one of my friends felt apprehensive towards the dish. He never tried it before, and quite frankly, he didn’t want anything to do with it. But out of respect, he actually tried one half of a sprout! And then, he went back for two more! We struck a compromise, and it was a personal victory for me.

Is it me, or have there been a ton of brussels sprouts recipes popping up lately? It’s just like how the food world jumped at pumpkin at the first crack of fall this year. (I’m guilty of this, too.) Of course, I think you should try as many as possible because brussels sprouts are fantastic. But why should you give this one a go? Because you’ve spent all that time making pomegranate molasses, and you want to know how it tastes! You’ll find that it is similar to maple-glazed brussels sprouts with balsamic vinegar, but the pomegranate molasses gives it an additional tang.

These babies are great just on their own, but add some pomegranate seeds and toasted pine nuts for extra pizzazz and presentation. We’re all about presentation points here. 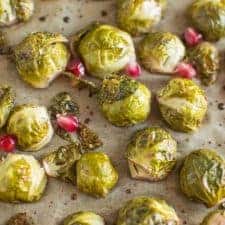 Did you make this recipe?Tag @hellolisalin or leave a star rating and comment on the blog!
Category: gluten-gree, Sides, Vegan