Kindness and compassion. I’ve been thinking about those words a lot over the last few days. Our world, our humanity can use a bit more kindness and compassion right now. I am no politician, and I don’t profess to know the best way to handle what happened in Paris last Friday or all the other atrocities that have happened in Syria, Lebanon, and Kenya. But these events are a stark reminder to me that on a personal level, I should always strive to be kind and to care for others. Thanksgiving and Friendsgiving couldn’t come any sooner.

This year, my Friendsgiving dinner is on the Saturday after Thanksgiving, and I’m still trying to figure out what entrée dish to bring. After two failed attempts to make the best baked mac and cheese ever, I’ve settled on this shepherd’s pie. There’s probably going to be more meat dishes than we can handle at our gathering, so I decided to make this shepherd’s pie with lentils instead of ground lamb or beef. This dish is so flavorful and filling that I don’t think anyone will miss the meat in here! 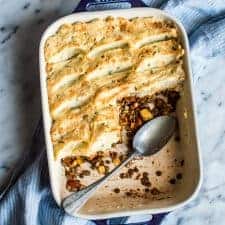