Can we talk about the slow cooker? It’s one of those “great-to-have-one-but-where-do-I-find-the-space” kind of kitchen tools . . . a bit like a waffle maker, really.

Several months ago, I found a huge gift-wrapped box with a big white ribbon inside a large evergreen Williams Sonoma bag. We’re talking BIG and heavy. My heart fluttered. I thought, “SHUT THE FRONT DOOR!! Ahhhhhh!!!” I convinced myself that some delightful soul threw down some money and got me a Kitchen Aid mixer (because I have been yammering on about wanting one). I don’t remember which came first—feelings of surprise or the tinge of disappointment when I tore open that wrapping paper. You guessed it, I got a slow cooker. No binge baking for me!

Okay, maybe I’m doing the slow cooker a bit of injustice. I’ve been describing it like a bridesmaid wearing a classic ugly bridesmaid dress, but I’ve come to realize how much of a gem it is. Case in point: slow cooked pork. WHOA.

I had never cooked pork that tasted so good before: soft, flavorful, melt-in-your mouth kind of good. For dinner one night, I made a batch of this Asian pulled pork. I often describe my recipes as “Asian” such and such, but what makes this pulled pork “Asian”?

Not entirely Chinese, Japanese, or Southeast Asian, this scrumptious pulled pork does not believe in labels. And quite frankly, I don’t either . . . except when I’m tabbing my cookbooks and magazines.

This recipe calls for 2.5 pounds of pork shoulder, so expect a huge hunk of meat! I sliced the meat into 3/4″ to 1″ thick slices, and trimmed all the excess fat. To me, pork fat is great for frying, not so much for the slow cooker. 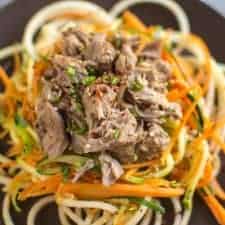 1. Mirin is Japanese rice wine (not to be confused with rice vinegar). If you don’t have any around the house, just skip it and add another spice to the slow cooker.[br][br]2. If you’re saving the broth to be used again, be sure to skim the fat off the top of the liquids.
Did you make this recipe?Tag @hellolisalin or leave a star rating and comment on the blog!
Category: dinner, slow-cooker