I sense your eyes rolling as you realize that I’ve created one of those frozen banana ice cream recipes. You know, those “toss a frozen banana in a blender and you get ice cream” recipes that swept the interwebs. It’s too good to be true, like an uber healthy recipes claiming that you could make chocolate cake with just protein powder, bananas, and milk (<—- impossible, by the way). I almost didn’t want the recipe to work just so I can prove everyone wrong.

I’ve made frozen banana ice cream so many times that I was starting to get sick of the flavor. After all, it’s just a banana. A few days ago, I decided to add a bit of fat. Fat’s the solution to all kitchen quandaries, isn’t it? In goes a bit of coconut peanut butter and coconut milk, out comes something that is FREAKIN AWESOME. “Freakin” is totally a legit superlative.

Just look how fluffy this banana ice cream is!

When you’re preparing the bananas for freezing, do yourself a favor. Slice up the banana and freeze it in a Ziploc bag in a single layer. Your blender/food processor will thank you for this.

I used a coconut peanut butter spread for this ice cream because I wanted a bit more coconut flavor in the ice cream. You can substitute it with other nut butters, too! Are you ready for this freakin awesome vegan dessert?! 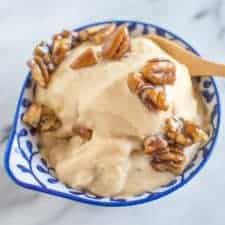 Feel free to add other topping such as cacao nibs or more coconut!
Did you make this recipe?Tag @hellolisalin or leave a star rating and comment on the blog!
Category: Dessert, Vegan

Treats that go well with this ice cream: