Egg Fried Rice In A Mug

Did you know that you could cook egg fried rice in a mug? This flavorful fried rice is ready in minutes, perfect for those days when you are feeling hungry and impatient.

Fried rice has a special place in my heart.

When I was about 11 or 12, I was sent home from school because I had some serious girl pains. Ladies, you know what I’m talking about. I was home alone, and there was no ready-made food at my house except for a loaf of bread. I think any teenager would have just scrounged up some pb&j, toasted the bread, and called it a day. I was feeling a bit ambitious.

At the time, I had never cooked on my own. Sure, I helped Mama Lin with random tasks in the kitchen, but cooking from scratch was an “adult” thing to do. Maybe I felt like pretending to be an adult on that rainy day. I can’t remember anymore, but I was determined to cook rice for myself. I had seen my grandmother do it a thousand times. Rinse the rice, set the rice cooker, and ta-da, lunch would be ready. Or so I thought.

It didn’t take long for me to realize that I was in over my head. Goopy would be the best way to describe that rice I made. The pre-teen me didn’t realize that the numbers etched inside the rice cooker bowl actually meant something. They told me how much water I should put in there! Even though I was making my way into uncharted territory in the kitchen, I was so sure that I could just eyeball the amount of water. Enter goopy rice.

Then, genius idea #2 came along—fix goopy rice by making it into fried rice. I was convinced that the heat from a wok would help evaporate moisture from the goopy rice and I would be left with perfectly fluffy fried rice. I’m sorry to report that things really don’t work like that. I was so ashamed by my efforts that I made sure to clean up the kitchen before anyone got home. No reason to turn this episode into a lifelong family joke.

And that, my friends, is my experience cooking fried rice for the first time. If only I had known that I could cook fried rice in the microwave 17 years ago . . .

One of my Christmas presents was this Meal in a Mug cookbook—80 single-serving recipes that you cook in a microwave. The Egg Fried Rice recipe immediately caught my eye because everything about it flies in the face of conventional wisdom. The funny thing is, the recipe actually worked! I changed up the original recipe by adding much more vegetables (of course) and spices—five-spice powder, onion powder, and white pepper. Fried rice just isn’t the same without a ton of spices.

I wonder what Mama Lin would say to this microwaved fried rice. Probably something to the effect of, “You silly American child.”

Here’s a video of how to make a gluten-free version of this dish! While you’re at it, subscribe to my YouTube channel! 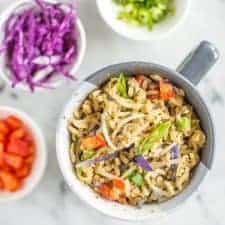 Egg Fried Rice in a Mug

This egg fried in a rice is a great single-serving meal for days when you feel too lazy to cook. Adapted from Meals in a Mug.
Prep Time5 mins
Cook Time3 mins
Total Time9 mins