Are you ready for the best brussels sprouts recipe EVER? Imagine roasted brussels sprouts doused in General Tso’s sauce. They’re sweet, tangy, spicy, and better than you can imagine. A quick 30-minute dish to spice up your weeknights!

General Tso probably never saw a single brussels sprout in his life, but this is the day when he finally meets them.

I lived a good 20 years before getting acquainted with General Tso. It happened at an unassuming Chinese restaurant in Davis with my college friends. I remember feeling embarrassed that my Chinese upbringing didn’t teach me about the ways of the General. But one bite into that fresh out the wok, deep fried chicken slathered in tangy sweet sauce, and all that shame melted away. I found my new Chinese restaurant addiction.

Even after all these years, I still don’t know who General Tso really is. Do you? There’s a documentary called The Search for General Tso that I’ve been aching to watch. It’s supposed to be a detective-style documentary, devoted to tracing the origins of this famed dish. I haven’t actually watched it yet, and I have no clue how to get my hands on a copy. (If you have any leads, do tell. Muffins will come your way.) Based on what I’ve read of the movie so far, the people behind the documentary do find a General Tso, but he wasn’t known for his cooking. That was the work of genius Chinese restaurant owners, who named the dish after him.

Speaking of which, what is with our obsession of associating fried chicken with military men? General Tso, Colonel Sanders, Popeyes. Is there something about fried chicken and machismo that I need to know about?

Now, I’m sure we all know someone who just hates brussels sprouts. We judge them for their ways, but we also want them to come over to the bright side. The next time you hear your friend complaining about how awful brussels sprouts are, here is the recipe to pull on them. This is hands down, one of the BEST batch of brussels sprouts I’ve ever had. You know all those sweet, tangy, spicy flavors you love in General Tso’s chicken? They’re all here, and then some. These brussels were so good, I licked the bowl after I was done! See for yourself. 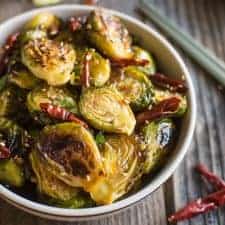