This healthy vegetarian pho with zucchini noodles is easy to make. The broth is infused with onions, ginger, star anise, cinnamon, cloves, and garlic.

I like to daydream about places in the world where I can live in besides the Bay Area. Seattle, Portland, England . . . If I really had things my way, I would own two homes of different character. One in the U.S. with the state-of-the-art kitchen and a garden so that I can pretend to grow things. Then another in England with a rustic kitchen and a nook for afternoon tea. That way, I can pop over to Mama Lin’s for a piece of her cake and have my Cornish pasties year round. Come to think of it, I would also like the ability to teleport, but that’s besides the point.

Wherever I live, there needs a LOT of Asian food around me. I don’t mean the one Chinese restaurant where everyone in town orders their greasy takeout. I mean somewhere that I can find some good dim sum, bún chà (rice noodles with BBQ pork), pad thai, curry, and lumpia in a pinch. Somewhere that I can find some obscure Chinese sauce if a recipe calls for it. How can I ever leave the Bay Area?

When I lived in D.C. a few years ago, there were two things that I missed sorely: a proper Asian supermarket where I can find all my Chinese sauces and a decent Vietnamese restaurant. The first problem was remedied by care packages from home twice a year (usually around finals time). The second problem was never resolved. That’s why I need to learn how to make Vietnamese food myself, so that I never run into any problems when pho or bún chà is hard to find.

Pho broth usually takes a few hours to make, but I used this trick from Bon Appétit to speed up the cooking process: charring the onion and ginger on a skillet before throwing it into the stock pot.

This pho broth involves onions and a few spices:

Just a word of warning, the flavor of star anise is STRONG. If you’re not a fan of it, just leave it out. The other spices will save the day.

Let’s get ready to slurp! 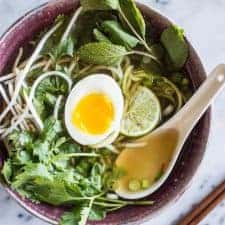 This vegetarian pho is a play on the classic beef-based pho. With zucchini noodles and soft boiled eggs, this bowl is the perfect light lunch or dinner! Serves 3 to 4.

1. Adapted from The Kitchn and Bon Appétit.br][br]2. If you’re not the biggest fan of star anise, just leave it out. Also, if whole cloves are difficult to find, 1/2 teaspoon of ground cloves work, too. [br][br]3. The noodles should be softened in the hot broth but not mushy.[br][br]4. Update 6/29/15: I mistakenly named this recipe vegetarian pho even though there is fish sauce in the recipe. For a full vegetarian version, use soy sauce instead of fish sauce.[br][br]4. I made my vegetable broth from scratch using [this recipe from the Kitchn.
Did you make this recipe?Tag @hellolisalin or leave a star rating and comment on the blog!
Category: Gluten Free, paleo