About half the advice that Mama Lin gives to me is age-old wisdom: treat your elders with respect; be kind to others; don’t overcook your bok choy. The other half is nothing but old wives’ tales: don’t wash your hair on your birthday or you’ll wash away your luck and fortune; don’t leave the house the month following the birth of your child; always keep a red envelope in your luggage when you’re traveling.

So when Mama Lin told me that I should store my potatoes with an apple, I thought it was another one of her old wives’ tales. It turns out that piece of advice might not be so ridiculous after all.

Have you ever left potatoes on your counter for a few days and noticed that they were starting to sprout? I first heard about this from Cindy—it turns out that those sprouts are toxic, but you won’t feel sick unless you’ve consumed a considerable amount of them.

I was talking potato sprouts with Mama Lin the other day (totally normal topic of conversation, by the way). She told me that I should store my potatoes with an apple because it would stop the sprouts from growing too fast. Being the good daughter that I am, I immediately shot her down and told her that was cray.

Okay, maybe I didn’t actually use the word “cray” because Mama Lin would have no idea what that meant.

Guess what? It turns out that apples really do help prevent potatoes from sprouting! Clearly, I should listen to my mother a little more . . .

On to these potatoes. Smashed potatoes are frequently on the dinner rotation at my house because they’re an easy side dish that doesn’t require much prep work or 100 ingredients. Just boil potatoes, smash them, add some cheese and spices, and bake. You’ll be left with some of the best potatoes you’ve ever tasted.

Don’t believe me? Try it for yourself! 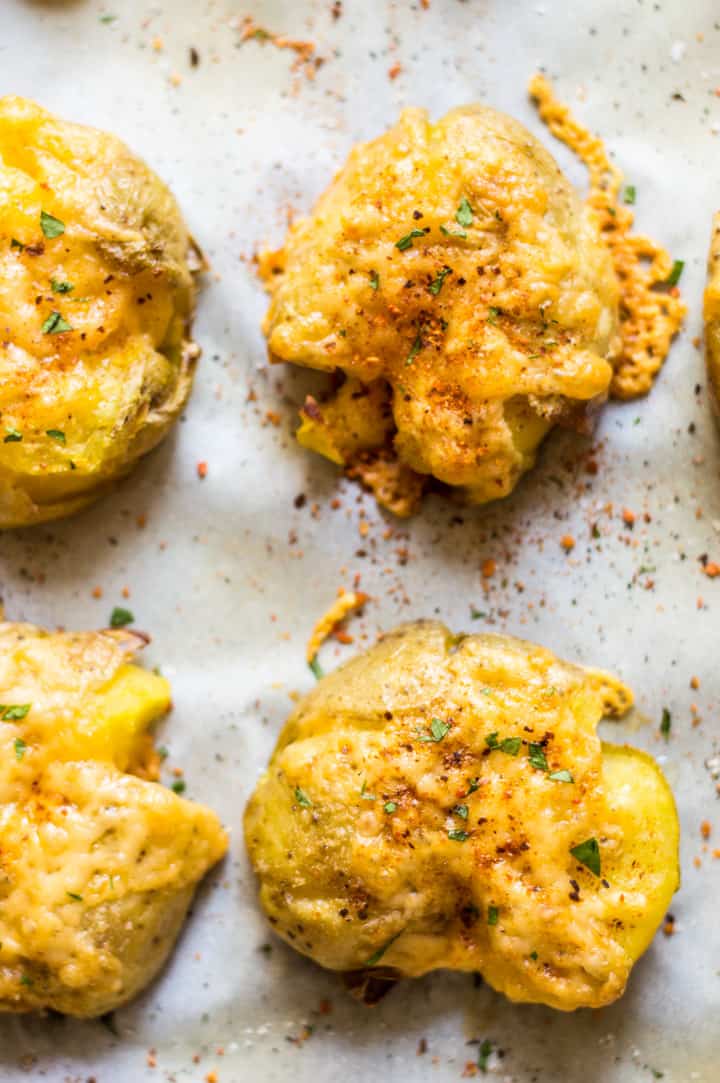 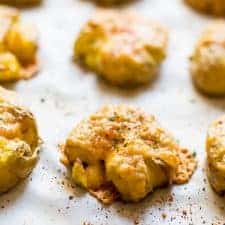 1. *You can also make this dish with larger potatoes. Just make sure to boil and bake the potatoes for a few more minutes. [br][br]2. Feel free to substitute the smoked gouda with any of your favorite cheeses.[br][br]3. For extra crispy cheese bits, sprinkle some of the cheese on the side of the potato so that the cheese touches the baking sheet. The crispy cheese will taste amazing!
Did you make this recipe?Tag @hellolisalin or leave a star rating and comment on the blog!
Category: Appetizer, Gluten Free