These spicy potatoes are perfectly crisp on the outside and soft like clouds on the inside. You haven’t truly enjoyed roasted potatoes until you try these!

Sometimes, things are just meant to be. Peanut butter and jelly are meant to be devoured together. I was meant to go see the Backstreet Boys concert last year to rekindle the guilty pleasures of my adolescence. And I was meant to make crispy roasted potatoes.

Remember me mentioning a few weeks ago about my struggles to replicate a roasted potatoes dish that I fell in love with in England? A few days later, out of the blue, I found a sample copy of Cook’s Illustrated in my mailbox. I didn’t subscribe to it, but I knew the content would be good because it’s published by America’s Test Kitchen. I quickly thumbed through the pages, and I kid you not, it landed on the recipe titled, “Really Crisp Roasted Potatoes.” It felt as if there was a culinary force out there willing for this moment to happen. Welcome to crispy roasted potatoes, part deux.

To my relief, I found out that I wasn’t doing anything grievously wrong. It was just…not enough.

First, the recipe says to cut the potatoes into 1/2-inch slices, and not chunks or cubes. There’s nothing inherently wrong with chunks, they’re just more difficult to flip and turn during the baking process. For those of you who, like me, can’t eyeball what a 1/2 inch looks like, it was about the width of my pinky.

Then, the taters need to be par boiled. YES, got this step the first time around! There’s a complicated scientific explanation for why it’s important to boiling the potatoes slightly first. Let’s just stick to this: there’s some starch molecules that need to come out for a big party and settle on the surface of the potato. When the potatoes enter the oven, those starches will help the potatoes get a nice golden tan.

Next, roughing it. Those slightly boiled potatoes need to be roughed up a bit so that the moisture in the potatoes evaporate faster. The magazine suggested tossing the potatoes in a large bowl with a spatula to rough up the surface. I prefer putting it back into the pot and shaking it up. It’s much more fun, plus the whole pot turns into a percussive instrument.

Finally, you have to put the potatoes in a hot oven and bake them for a while. That’s where I messed up big time during my previous trial. When I say hot, I mean 450 degrees F kind of hot. The potatoes also need a longer tan—closer to 40 minutes instead of the 25 minutes I gave it last time.

There you have it, a pan of lovely gold coins definitely worth making in your kitchen. 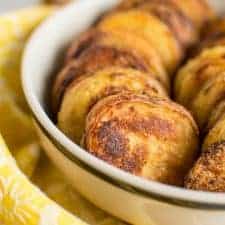 These spicy potatoes are perfectly crisp on the outside and soft like clouds on the inside. You haven’t truly enjoyed roasted potatoes until you try these! Serves 4.
Prep Time10 mins
Cook Time1 hr
Total Time1 hr 10 mins

Adapted from the Really Crisp Roasted Potatoes recipe from Cook’s Illustrated.
Did you make this recipe?Tag @hellolisalin or leave a star rating and comment on the blog!
Category: Appetizer, Gluten Free, Vegan