This soba noodles recipe is easy to prepare, and it is incredibly tasty. The noodles are tossed with a light almond butter sauce and served with sliced cucumbers, bell peppers, and scallions. Ready in just 20 minutes!

Soba noodles are great for weeknight meals because they cook very quickly—about 4 to 5 minutes in boiling water. In this recipe, I’m flavoring the noodles with a sauce that’s made with a combination of almond butter, soy sauce, and a few other seasonings. It’s light and nutty with a hint of sweetness. If you don’t have almond butter, just substitute whatever nut or seed butter you have at home.

The soba noodles recipe may look simple, but I promise that once you start eating them, you won’t be able to stop. I ate this for lunch and dinner several days straight, and I wanted more! 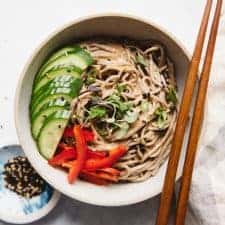 If you prefer another nut/seed butter, feel free to use it instead of almond butter. However, avoid flavored nut/seed butters, such as coconut peanut butter or vanilla almond butter. These additional flavors will alter the taste of the dish significantly (perhaps not in a good way).
Prep Time5 mins
Cook Time15 mins