If there ever was a way for watercress soup to be sexy, this would be it. Bunches of tender watercress are blended with potatoes, peas, ginger, scallions, and basil to make the perfect early summer soup.

A few months ago, I noticed something a little strange at the farmer’s market. At one of the farmer’s stalls, there was a fish bowl with 2 goldfish inside and some plants floating on top. “What is this?” I asked.

Aquaponic farming. Have you ever heard of it before? It’s pretty cool.

It’s a way of growing crops without soil. The plants are kept on a growing bed that is connected to a large fish tank, and water flows through both units. Fish waste provides nutrients for the plants, and the plants help clean the water for the fish to swim in. Besides creating an awesome ecosystem for the plants and the fish, aquaponic farming also uses less water than traditional farming. Pretty sweet, right?

One of the things that this aquaponic farm sells is watercress. Now, the way Mama Lin taught me how to cook watercress was by boiling it in a pot of water with some pork shoulder and seasoning it with some salt. I like it, but it’s definitely an acquired taste and it takes a longer time to make.

I googled a few watercress soup recipes, and landed on this one by David Lebovitz. My goodness, it was SO tasty. I quickly polished off the entire batch of soup in a few sittings and licked the bowl each time. To put my own spin to the recipe, I loaded the soup with ginger, scallions, and basil, which helped to brighten up the flavors. I also used less watercress so that the flavor of the cress would be more muted.

Save up a few bread pieces so that you can mop up all the soup in your bowl! I’ve also dipped my baked tortilla chips into the soup, and that was also scrumptious 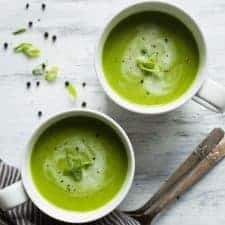 Watercress Soup with Potatoes and Peas