These chili and garlic stir-fried brussels sprouts cook FAST. This Thai-inspired, healthy stir fry is ready in just 20 minutes! No asparagus? No problem—substitute it with other vegetables like green beans, carrots or bell peppers!

In an episode of The Food Programme on farming in Thailand, they discussed farming communities in the Northern Chiang Mai province. Many farmers were transitioning from farming opium in favor of produced commonly used in Western cuisine. Because the climate in northern Thailand is much cooler, it is conducive to growing crops like Brussels sprouts, beets, salad greens, and peaches. This national agricultural development project launched in the late-1960s. Now, many farmers sell their produce to fine dining restaurants throughout Thailand.

I was flipping through Andy Ricker’s cookbook, Pok Pok, and I found a recipe for stir-fried Brussels sprouts with Thai flavors. It tasted delicious, and I have adapted the recipe to incorporate more vegetables and simplify the cooking process.

Asparagus is in season right now, so I have added them to the stir fry. I also took out the oyster sauce that was in the recipe and replaced it with more fish sauce and soy sauce and a teaspoon of potato starch to thicken the cooking sauce. 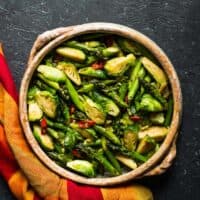 If asparagus is not readily available, you can substitute them for green beans, sliced carrots or even bell peppers! For a vegan version, use 6 teaspoons of soy sauce. Taste the vegetables and add a pinch of salt if you want more seasoning. Adapted from Andy Ricker's Pok Pok.
Prep Time10 mins
Cook Time7 mins
Total Time17 mins