Here is Mama Lin’s recipe for homemade Chinese chicken wonton noodle soup. It is a delicious and light soup served with wonton noodles, baby bok choy, and carrots. Make it a complete meal by serving the soup with chicken wontons!

Here is Mama Lin’s recipe for homemade Chinese chicken wonton noodle soup. It is a delicious and light soup served with wonton noodles, baby bok choy, and carrots. Make it a complete meal by serving the soup with chicken wontons!

Thank you to Knorr® Chicken Powder for sponsoring this post!

When I was growing up, Mama Lin always made chicken soup on the weekends. First, she went to Chinatown in San Francisco to buy a fresh chicken. Then, she came home to butcher, clean, and prepare the chicken for making soup. The best chicken soup came from fresh chickens, she would say. Nowadays, she buys freshly butchered chickens from Chinatown, but her soup making ritual remains the same otherwise.

Mama Lin cooked chicken soup in a variety of ways. Sometimes, she slow cooked chicken with dried roots, herbs, and fruit and made me drink the soup like a vitamin supplement. The soup was good for improving my immune system, she claimed. Other times, she made chicken soup as a bone broth base for meals, such as wonton noodle soup or tang yuan (glutinous rice dumplings). She would also cut up the cooked chicken and serve it alongside the meals.

I have always been intimidated by making chicken broth from scratch, but I thought it was finally time for Mama Lin to pass this culinary tradition on to me. Like most of her cooking, Mama Lin rarely follows an exact recipe, so it took a little effort to whittle down her cooking directions to a precise recipe. But we finally did it.

As we made the chicken soup together, Mama Lin reached for the jar where she keeps her supply of Knorr’s Chicken Powder. She told me that the chicken powder increases the umami flavor of the soup, so she always adds a little scoop.

Mama Lin also uses Knorr Chicken Powder in many of her other dishes, such as her turnip cake, sticky rice, and dumplings. Honestly, many Chinese aunties use chicken powder to boost the flavor of their food.

When Mama Lin wanted to prepare a quick lunch for the family, she used the chicken broth as the base for a noodle soup with dumplings and vegetables. Developing this recipe reminds me of the weekends when I was young, watching I Love Lucy reruns while slurping on a bowl of Mama Lin’s chicken wonton noodle soup.

Typically, Mama Lin makes chicken soup with a whole chicken that she buys freshly butchered from San Francisco’s Chinatown. Of course, I can’t easily buy a chicken from Chinatown anymore, so I bought a chicken between 2.5 to 3 pounds from the farmers market. Whole chickens at supermarkets tend to be at least 4 pounds, a little too big for this recipe.

If you can’t find or prefer not to cook with whole chickens, you can make the chicken soup with chicken breasts as well. Buy 2 pounds of bone-in chicken breasts; meat with bones intact makes better flavored broth. According to Mama Lin, you’ll also need to add a piece of pork loin when making broth with breast meat.  You get more umami flavor that way. Whether you go the whole chicken or chicken breasts route, you’ll end up with a delicious broth.

GETTING RID OF IMPURITIES

When you make the broth with chopped up chicken pieces, you’ll notice that small bits of congealed blood or white foam that will float on top of broth as you cook the meat. These are impurities that you need to wash away. Otherwise, the broth will look very murky.

To do so, boil about a quart of water in a stock pot. Then, place the pieces of meat into the boiling water and blanch them for about 5 minutes, flipping halfway. Remove the meat from the pot and transfer them to a plate. Next, rinse the stockpot and scrub away any foam that’s stuck to the sides of the pot. Give the meat pieces a quick rinse too, in case there’s any foam stuck on them.

COOKING TIME FOR THE BROTH

When it comes to the cooking time for the broth, you have two considerations. You can simmer the chicken for up to an hour to maximize the flavor of the broth. The slight issue with this method is that the chicken meat will toughen over time, especially if you are making the broth with chicken breasts.

If you are using the chicken breast method of making the broth, you can take one of the breasts out earlier for serving and leave the other one in the pot for simmering the broth.

Once the broth is done, season it with Knorr Chicken Powder and salt. Because Mama Lin needs to watch her salt intake, she doesn’t like to add too much salt to her broth. She also thinks that you can taste the flavors of the chicken better when the broth is less salty. Use the amount of seasoning listed in the recipe as a guide and feel free to add more salt or Knorr Chicken Powder to suit your taste.

Take this dish a step further by making chicken wontons! I love adding wontons to this chicken wonton noodle soup because it makes the entire dish a more well-rounded meal. In the recipe that follows, the wonton filling is chicken meat, shrimp, and a few herbs and spices. Mama Lin also added Knorr Chicken Powder to enhance the flavor of the filling.

The wontons are easy to wrap as well. Just add about 2 teaspoons of filling into the center of the wonton and wrap it up. There’s no proper way to fold these. I start by folding the wrapper into a triangle. Then, I gather up the bottom left and right corners and scrunch everything up. You don’t need water to seal the dumplings because the meat will hold everything together. 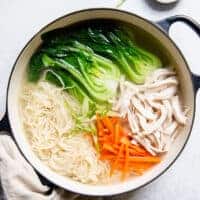 Cook the Noodles and Vegetables

Cleaning the chicken is optional. Mama Lin likes to clean the chicken first, so I have included the directions here.

Disclosure: This post was sponsored by Knorr® Chicken Powder.