There is nothing more comforting than a good bowl of soup! This one-pot red lentil soup gets rich and creamy flavors from coconut milk and it is packed with flavor. You can swap out any of the vegetables for anything that you have on hand. The red lentil soup is even better the next day!

Quick Links: How to use leftover coconut milk

When I flipped through Christopher Kimball’s Milk Street cookbook weeks ago, his spicy red lentil stew immediately grabbed my attention. The stew is heavy on coconut flavor, which I love in my soups. I could feel my mouth water as I stared at the photo of the rich, creamy yellow broth.

The stew was influenced by Indian cuisine, Goan cuisine in particular, and it was delicious. I loved the creaminess of the red lentils and coconut as well as the blend of spices he used.

I have made the soup several times and modified the original recipe in several ways. One big change is that I used much less coconut milk: I used 3/4 cup instead of an entire 14-ounce can. Although full-fat coconut milk imparts great flavor and gives richness to a dish, I don’t want a weeknight dish to be too heavy. I also added some quinoa to make the red lentil soup more of a balanced meal. In addition, I changed the vegetables in the recipe, and altered the cooking process in the beginning. Finally, I doubled the amount of red pepper flakes in the recipe because I could barely detect any heat in the original recipe. Don’t worry, the heat should not be overwhelming here!

Can you substitute any of the spices?

Can I use another grain?

Yes, but make sure to use a grain that cooks in roughly 30 minutes, such as white rice, bulgur wheat, or millet.

Other ways to eat the red lentil soup

I LOVE the leftovers of the red lentil soup. The soup will thicken the next day. I reheated leftover soup and poured it over cooked bulgur like a sauce. The bulgur tasted amazing with a side of baked salmon. You can swap the salmon for any protein you prefer, such as tofu, chickpeas, or chicken.

This recipe uses about 1/2 a can of coconut milk. Wondering how you can use the rest of it? Here are some suggestions: 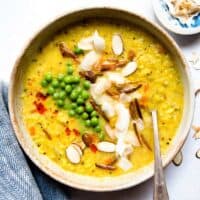 Although the red lentil soup takes 50 minutes to make, the majority of it is inactive cooking time. You'll definitely want to eat the leftovers of this red lentil soup because they taste even better than the day before. The flavor of the spices continue to develop overnight. I also love adding crunchy bits to my soup, which is why I added toasted coconut, almonds, and fried shallots. Feel free to leave any of them out if you do not have them on hand. Recipe adapted from Christopher Kimball's Milk Street
Prep Time10 mins
Cook Time40 mins
Total Time50 mins

I recommend rinsing the red lentils just before you add them to the pot. The lentils tend to clump up very easily. If you rinse them ahead, you will probably end up with a large block of red lentils, though they will separate during the cooking process.