How to Make a Crispy Dumpling Skirt (Dumpling Lace)

Take your pan-fried dumplings to the next level by cooking a dumpling skirt! This thin and crispy lace-like layer is like eating a thin chip along with your dumplings! All you need is 3 ingredients to make the dumpling skirt: water, flour, and salt. Watch the video below for a demonstration.

Quick Links: Why use a nonstick pan to make dumpling skirt

If you’ve ever made any of my pan-fried dumpling recipes, you’ll know that I covet dumplings with golden brown crispy bottoms. In my opinion, the best way to get the crispiest bottoms on dumplings is to cook them with a dumpling skirt.

The dumpling skirt (sometimes called dumpling lace) is a thin and crispy tuile-like layer that’s attached to dumplings when cooked. To create this lacey layer, you make a slurry (or batter) of water, flour, and a tiny pinch of salt. Then, pour the slurry around the dumplings that are pan frying and cover the dumplings with a lid to finish the cooking process. Once the water evaporates from the pan, you’ll be left with a thin web of golden crispy surrounding the dumplings.

Even the bottoms of the dumplings will stay crispy for longer when you cook the dumpling skirt!

TIPS ON HOW TO MAKE THE BEST DUMPLING SKIRT

You only need water, flour and a tiny pinch of salt for the dumpling skirt slurry. The lace tastes noticeably better with a tiny pinch of salt. I tried experimenting with the slurry by adding garlic powder, but it didn’t add much flavor as the spices just burned during the cooking process. I also tried using various flour combinations and found that plain flour yields the crispiest dumpling skirt.

If you’d like to try making a skirt with another type of flour, try Andrea Nguyen’s recipe for a dumpling skirt. She uses rice flour instead of plain flour, which gives the skirt a subtle sweet flavor. The skirt tasted like a piece of thin rice paper that comes with a lot of Asian confections.

USE A NONSTICK PAN TO COOK DUMPLINGS

Heat the nonstick pan with 2 tablespoons of oil in the pan (my pan is 12”). Don’t be stingy with the oil. If you use less oil, the dumpling skirt won’t be as crispy and some of it may stick to the pan.

Cook the dumplings for 2 to 3 minutes, until they start to turn golden on the bottoms. If you are using frozen dumplings, you may need to add an extra minute or 2.

Pour the dumpling skirt slurry throughout the pan, making sure that the slurry covers all the empty spaces between the dumplings. There will be a lot of splattering because you’re pouring liquid onto hot oil. Hold onto the pan’s lid and use it as a shield to block the splatter.

Reduce the heat to medium, cover the pan with the lid, and cook for another 5 to 6 minutes. Then, uncover the pan. Some parts of the dumpling skirt may still be pale and the water might not have fully evaporated. Move the pan around to brown those areas that are still pale. Cook until everything is golden and all the water has evaporated.

FLIP THE DUMPLINGS ON A PLATE

Enjoy the dumplings with my soy and vinegar dumpling sauce or sweet chili sauce!

DUMPLINGS THAT ARE PERFECT FOR PAN FRYING 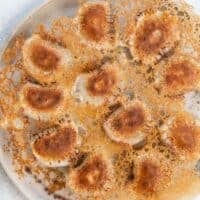 The recipe below is good for 1 batch of dumplings. You can double up the recipe if you are making 2 batches. Any of the following pan-fried dumpling recipes will be great for cooking with the dumpling skirt: mixed vegetable potstickers, pork and cabbage potstickers, chicken potstickers, and tofu & kimchi dumplings.
Prep Time5 mins
Cook Time15 mins
Total Time20 mins