I finally cracked the code on making the flakiest scallion pancakes! They’re thin and crisp on the outside, and when you rip them open, you’ll see all the wonderful layers. Serve them as an appetizer or for dinner!

Scallion pancakes (蔥油餅) is one of those traditional Chinese dishes that will please a crowd. In general, they are pan fried so that they get nice and crispy on the outside. The sign of a good scallion pancake are the flaky layers of dough. When I say flaky, I don’t mean buttery pie crust kind of flaky. Rather, when you rip open a scallion pancake, you should see thin, overlapping layers of dough. It gives the pancakes a light airy quality in the center.

It took me a while to figure out the best method for making scallion pancakes. In the past, I rolled out small balls of dough into a relatively thin circle, rolled that circle up into a tight log, and curled that circle into a snail-like shape. Then, I would roll out that curled dough into a thin circle again, and pan fried the pancakes (see my post here for the full recipe). Although the pancakes tasted fine, I still believed that I could come up with a better recipe. After watching many, many YouTube videos, I finally developed a better method for the recipe! 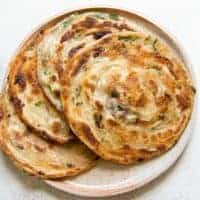 When testing the recipe, I weighed out the flour and water. The dry weight measurements listed below are close approximations. If you feel that the dough is very sticky as you knead it, add about a tablespoon of flour and knead again. Continue adding more if the dough still feels very sticky. If you are doubling the recipe, use several tablespoons less water. If the dough is feeling dry after kneading for several minutes, gradually add a small drizzle of water.
Prep Time2 hrs
Cook Time20 mins
Total Time2 hrs 20 mins